A majority of Georgia Tech students, typically known as Type A students, are achievement-oriented, ambitious, and competitive. The heavy workload at Tech, together with students' high standards for themselves, leads to a high level of stress and mental health issues.

We designed a collective breathing game application that encourages students to do deep breathing exercises together in order to relieve their stress.

During the research phase, I was in charge of interviewing potential users and creating personas using Sketch. I also contributed to the literature review and competitive analysis.

After our brainstorming session, I created low-fidelity prototypes of the collective breathing dark-room concept, and moderated user feedback sessions. I then designed the user interface for the onboarding process and the tutorial of the app using Sketch, and created the game animation using Principle.

During the evaluation phase, I moderated several usability testing sessions, and was in charge of analyzing & synthesizing the data we collected and deriving design recommendations from them. 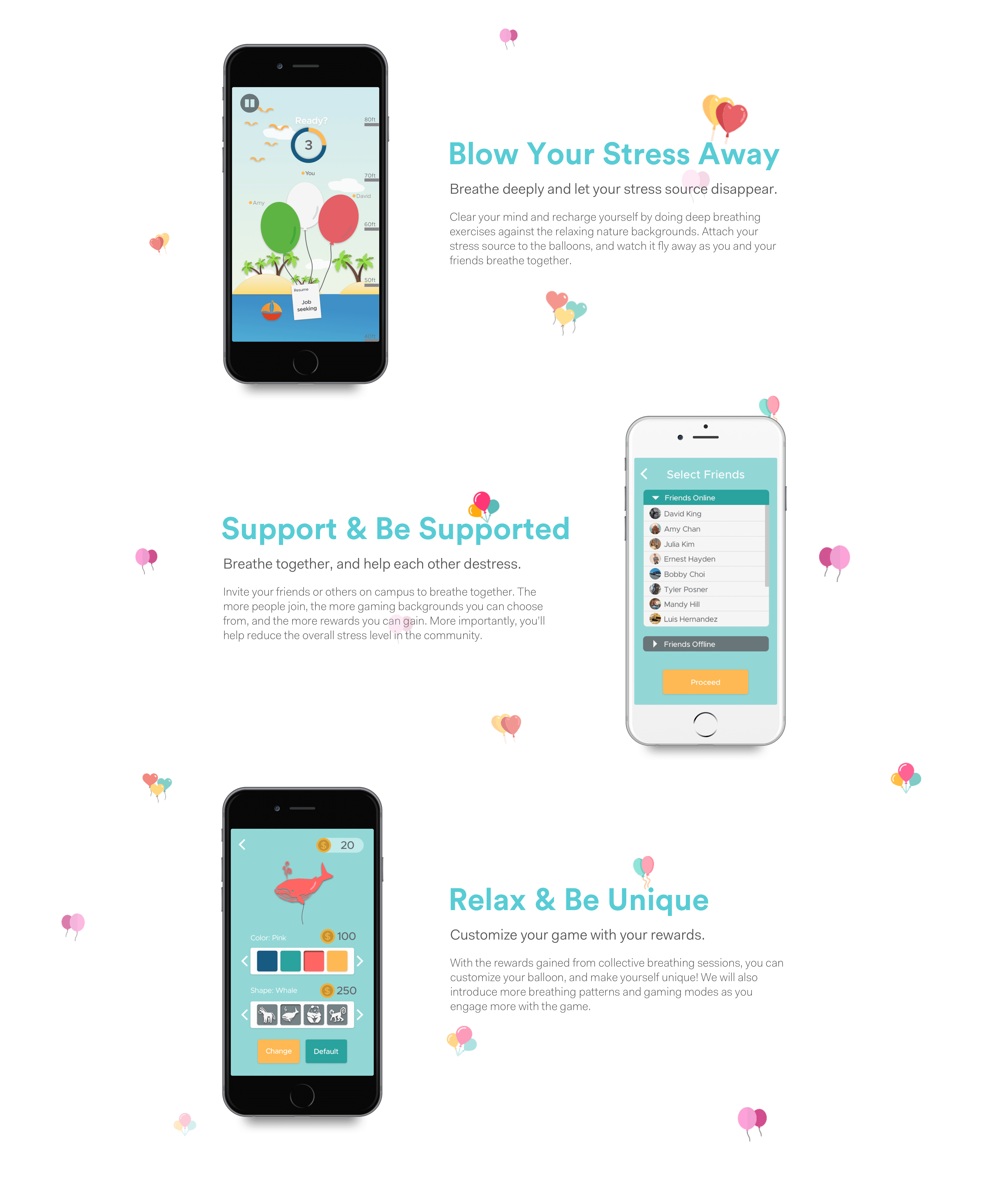 We started with a vague idea of designing an intervention to help relieve Georgia Tech's students' stress. After our interview with mental health experts on campus, we narrowed our idea down to creating a collective breathing intervention for stress relief.

To get an overview of Georgia Tech's students' stress level and the current intervention methods, we conducted a semi-structured interview with a mental health expert at Georgia Tech's counseling center. Having worked in the counseling center for over 20 years, our expert deeply understands where the student stress comes from, and has tried various ways to help improve students' mental health state on campus.

Since community-based peer support and simple relaxation techniques are proven to be effective, we hope to use technology to promote them so that more students have easy access to resources for stress relief.

After another unstructured interview with a Professor in Health Informatics, we decided to focus on creating a collective breathing intervention to encourage students to do deep breathing exercises together in the community. The research literature has consistently shown that deep breathing is a simple but effective way to relieve one's stress. Our idea is to not only encourage students to do breathing exercises, but also let them support each other throughout the process.

We first conducted a competitive analysis of existing individual breathing exercises and games on various platforms. 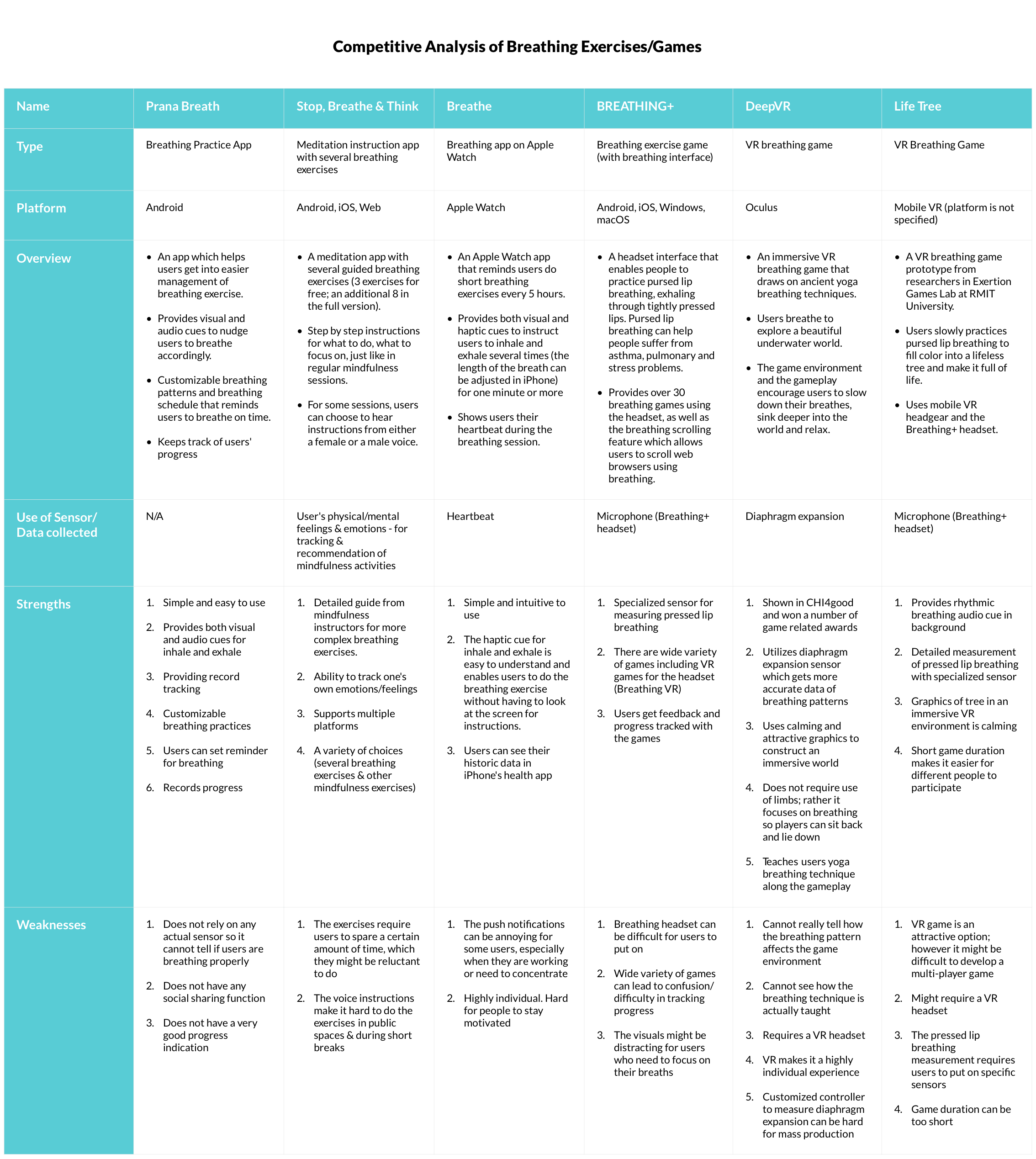 From the analysis, we learned that: 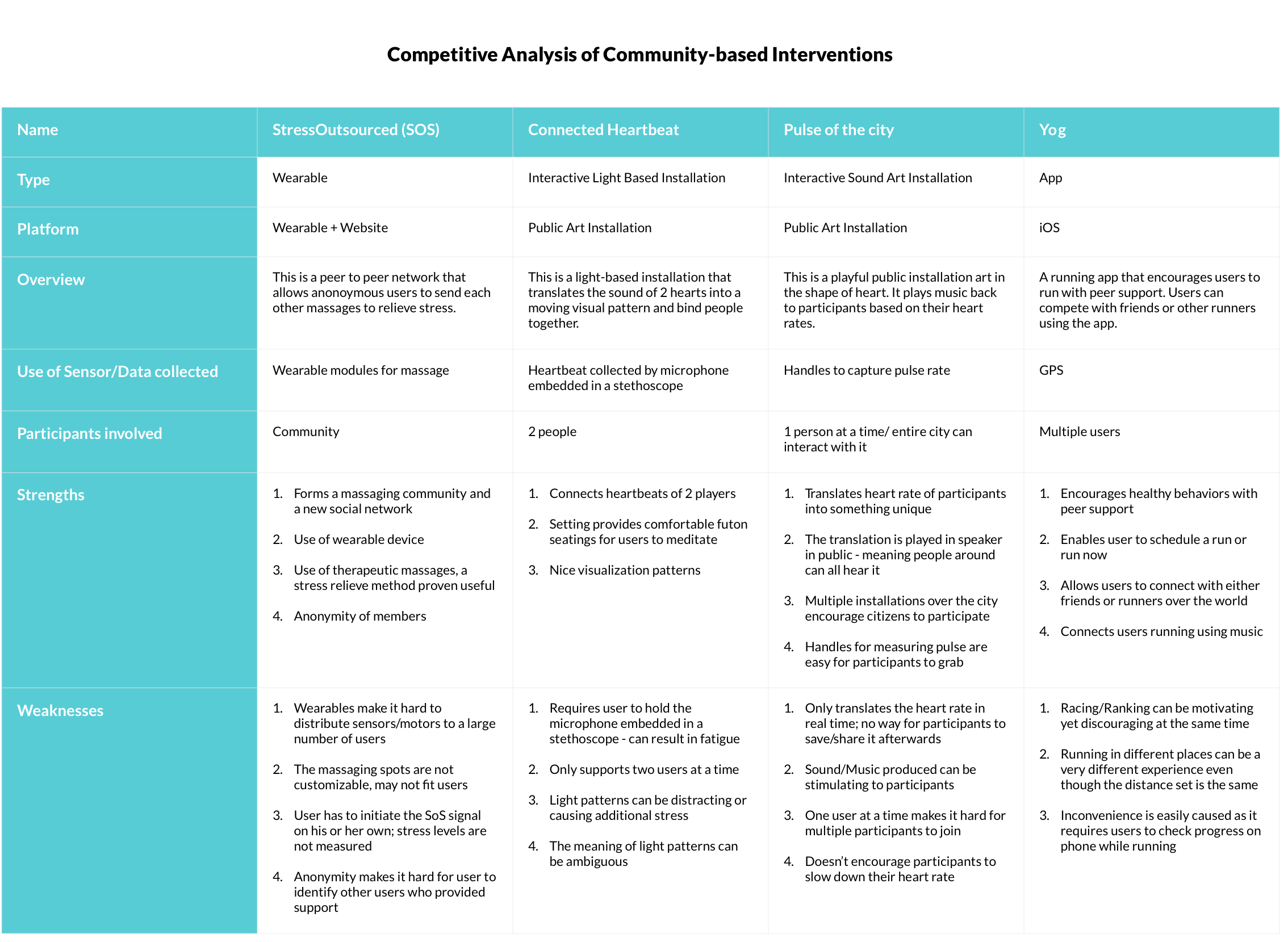 The main take-aways from the second competitive analysis include:

We looked into studies that focus on designing technologies that encourage people to practice breathing techniques. The literature review helps us find various ways of measuring people's breathing patterns and presenting feedback to them.

To learn more about our target users, I took the lead to conduct several semi-structured interviews with Georgia Tech undergraduate and graduate students. Some of our main findings include:

Our findings motivated us to design breathing interventions that are immersive and easy to learn. It also confirmed that motivating students to do breathing exercises together can be one effective way to relieve their stress, because most students have heard about breathing exercise and have positive associations with it.

After summarizing and analyzing the interview results with my teammates, I took the lead to create the following personas to help us guide our design. 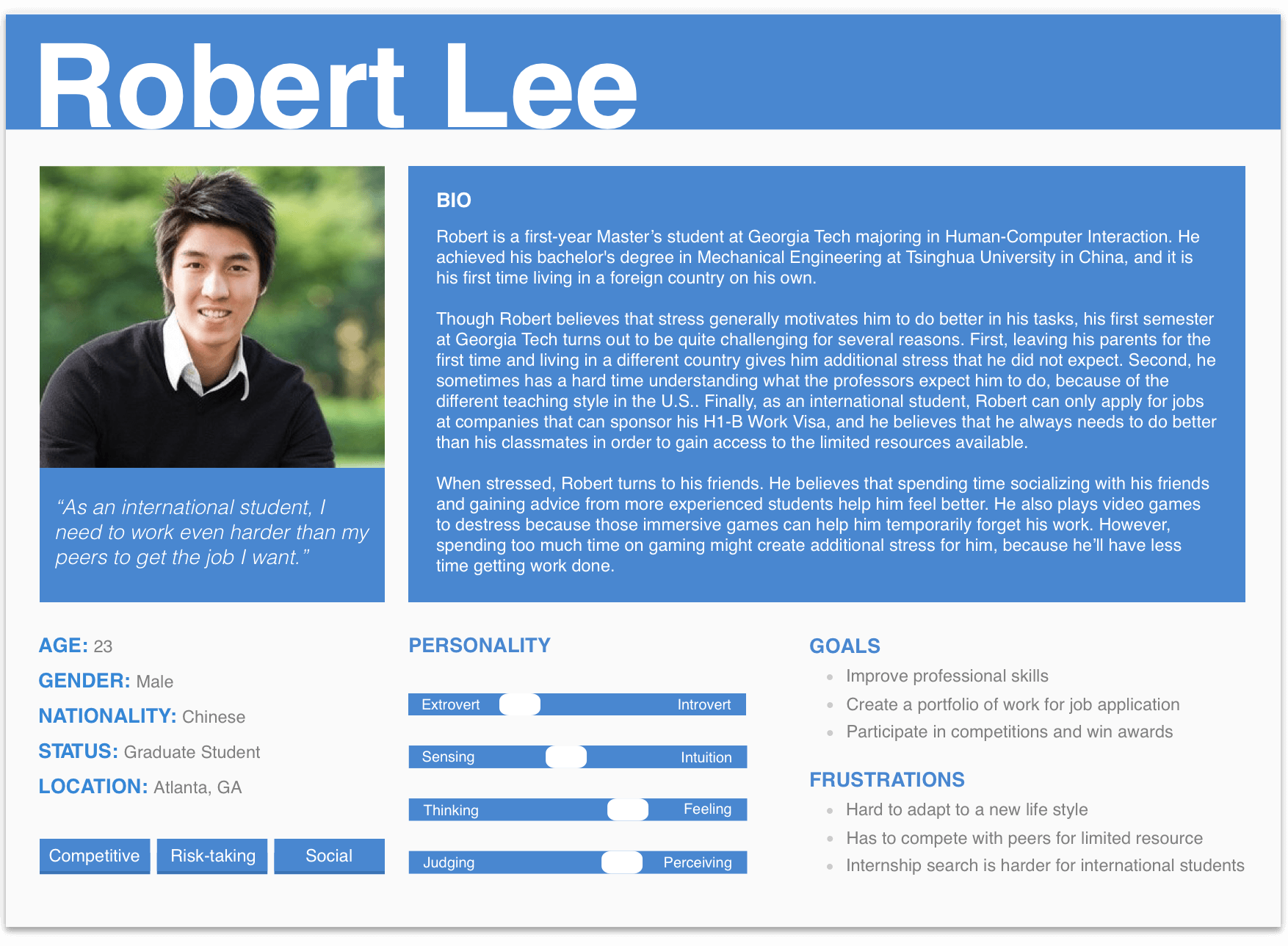 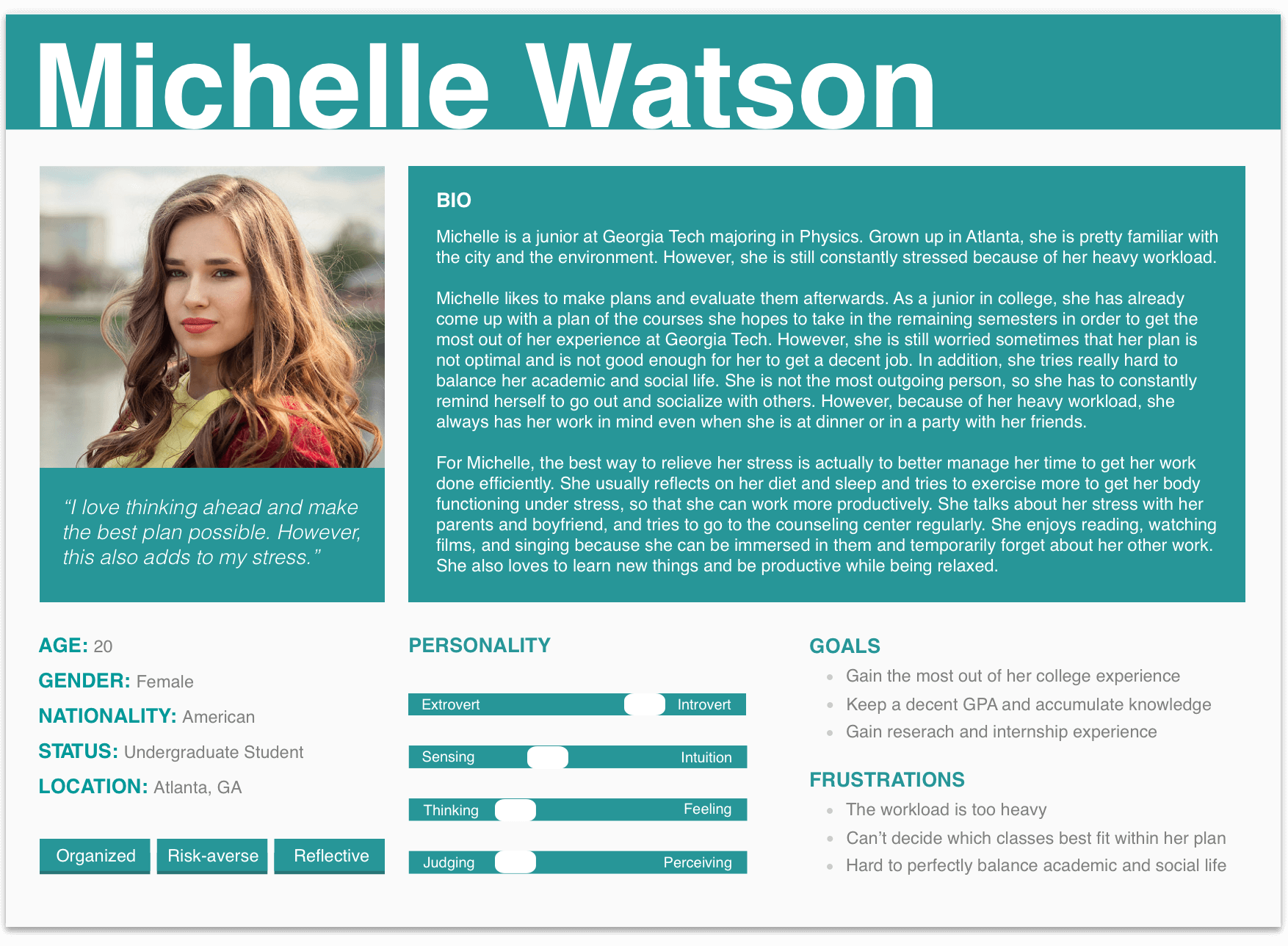 As a group, we conducted a design-studio-style workshop to brainstorm potential solutions. Group members were given two 10-minute sessions to sketch out as many ideas as possible. We then each presented our ideas, grouped similar ideas on the whiteboard, and offered critique to each other's ideas. 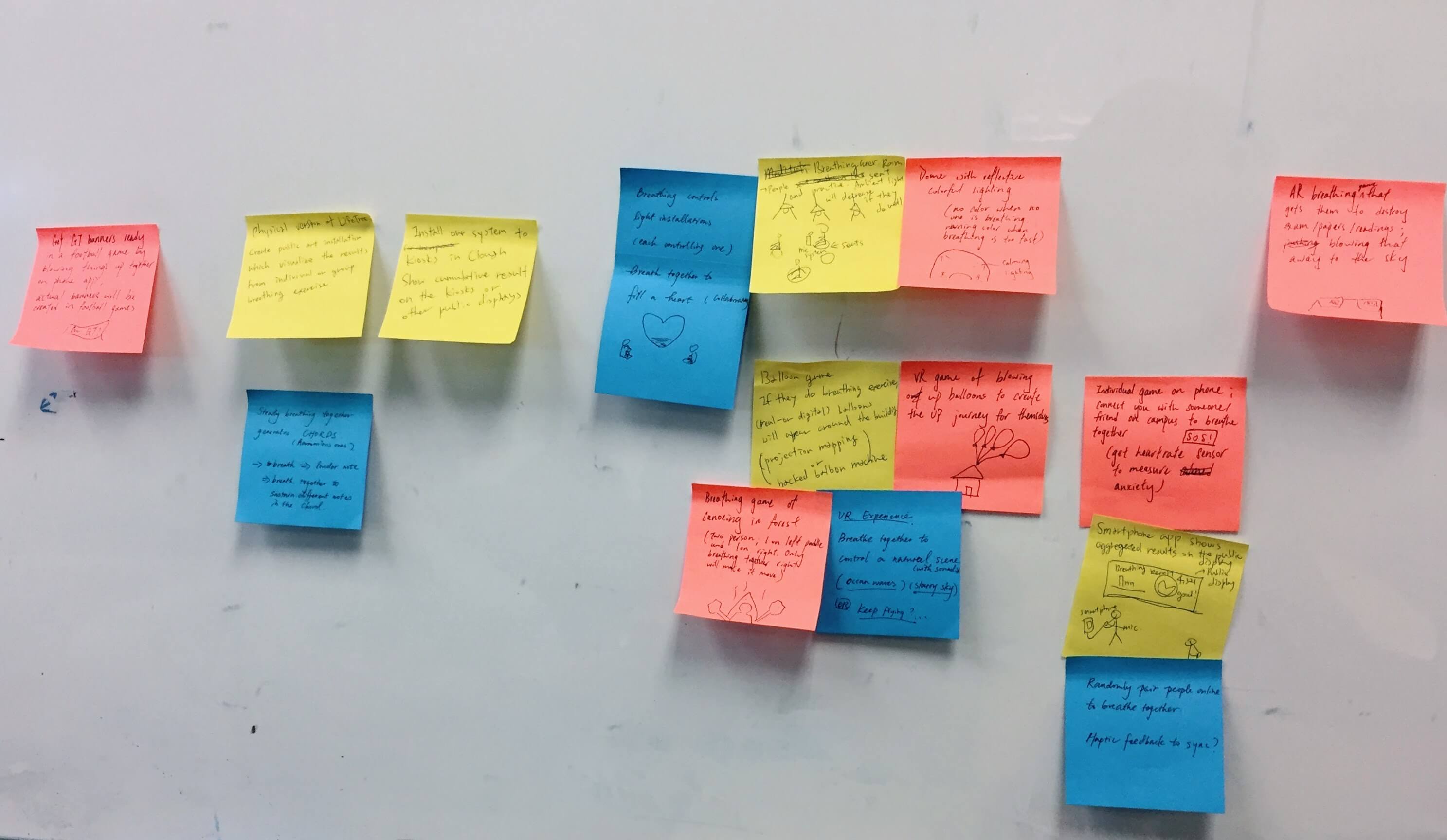 Here's a summary of the ideas generated. Ideas that are selected and combined into our final concepts are marked in red. 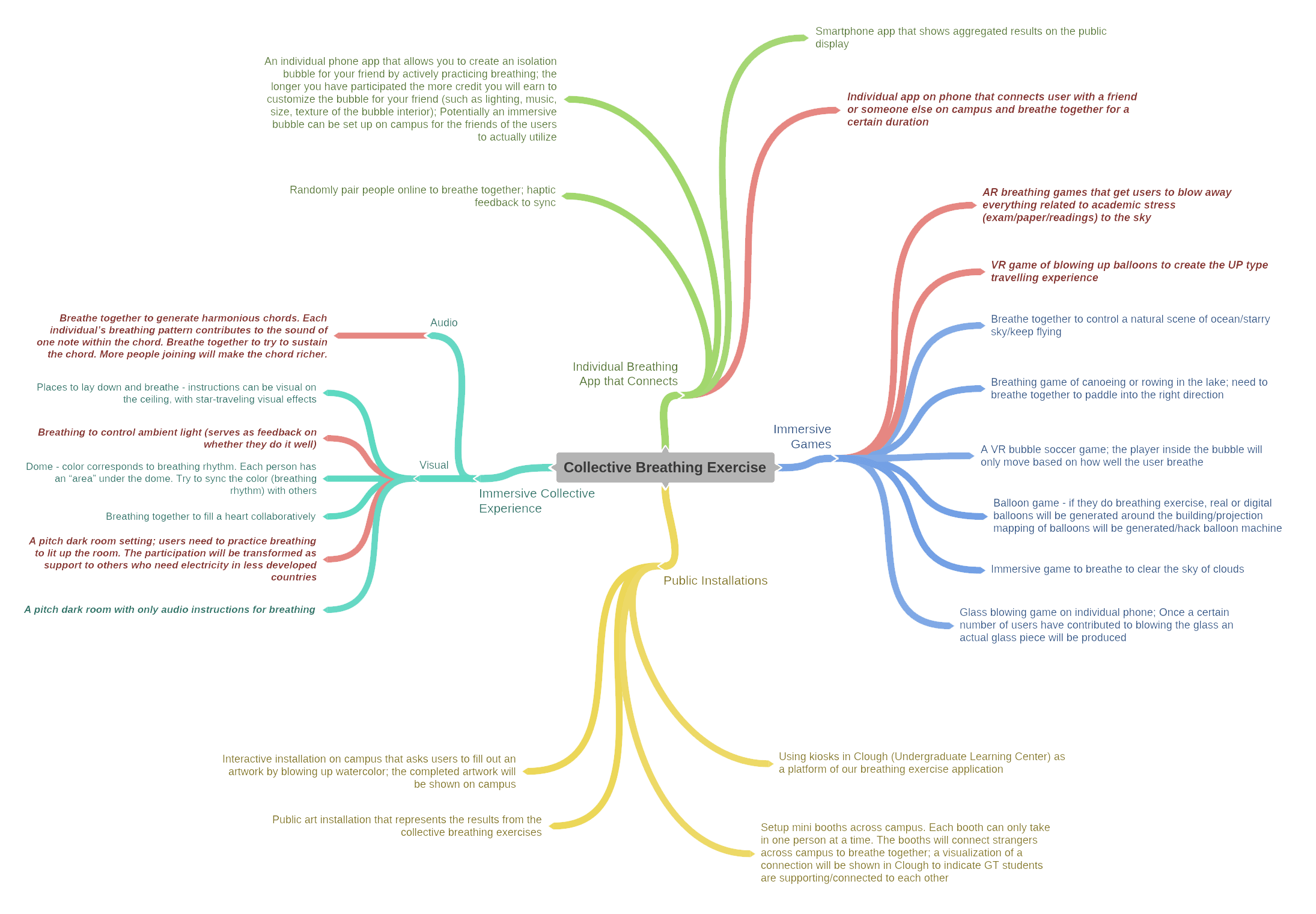 Based on our user research data, we reviewed our ideas based on a few key criteria including:

We then came up with low-fidelity prototypes for our top three concepts.

Concept 1 is a collective breathing exercise app that enables users to breathe with their friends or other students on campus. The purpose of this app is to teach users breathing techniques which can help relieve their stress, and to enhance a sense of togetherness by letting them breathe in similar rates/patterns with others. For this idea, users may be able to choose a belt type sensor or a microphone to measure their breathing patterns (in their smartphones). Click to view the low-fidelity interactive wireframe.

This is a collective, immersive experience that aims to let people (20 max) breathe together in a relaxing environment. Students are able to enter a pitch dark room and sit on futons, which have pressure sensors and can recognize when a student is sitting on it. After students put on their breathing sensor (belt) around their torso, they will be able to see their breaths visualized in wave form on a large display screen, which is mostly dark except for the breathing patterns.

Students will hear relaxing sounds of ocean waves that serve as an audio cue to let them know when they should inhale and exhale. In addition, there will hear a soothing background music, which is composed of a progression of simple music chords. The chords will become richer and richer as more people sit down and start to breathe; each person will contribute to part of the chord, so that the experience becomes even more immersive and relaxing as more people join.

In addition, we also hope to make this experience part of a fundraising process. We will let students know that when they breathe inside, they will be able to raise money for those in need of electricity. When they come out, they can see what they’ve contributed by breathing and relaxing themselves, which will motivate them to return and breathe more in the future. 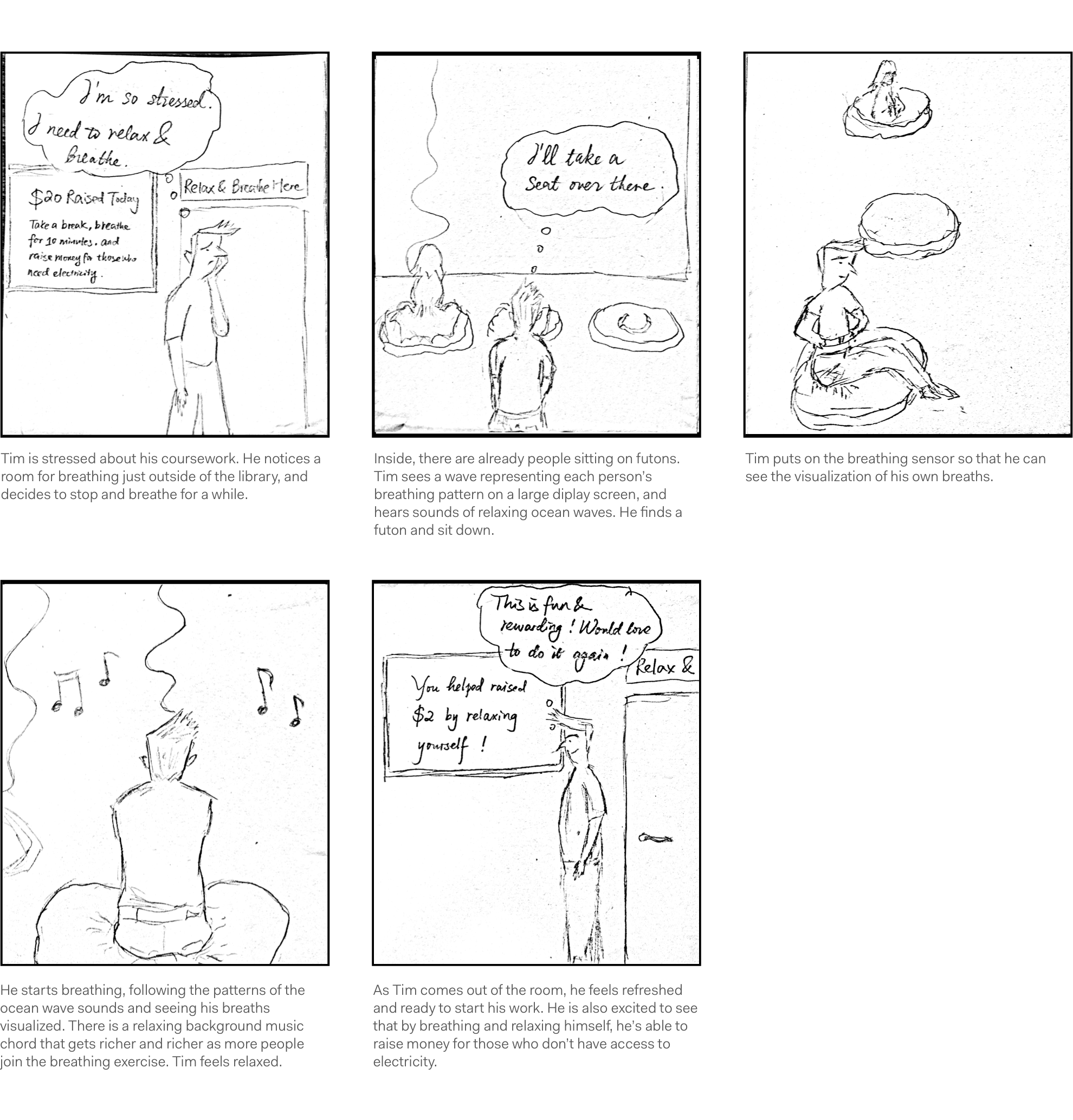 Our third concept is a mobile breathing game. Users are able to turn their sources of stress into a kite, and then breathe to fly the kite and "blow their stress away." They can play the game with friends they know, or anonymous players on campus, using either a belt sensor or a microphone as input. After successfully completing each breathing session, users are rewarded with points based on their breathing quality, and can use the points to customize their kites. Click to view the low-fidelity interactive wireframe.

We presented our 3 ideas to potential users at Georgia Tech and gathered both qualitative and quantitative feedback. For Concept 1 and 3, we let users interact with our interactive wireframes; for Concept 2, we walked users through our storyboard, played them a sample background music , and presented them with a sample visualization video so that they can get a feel of the immersive environment (we let them know that we will create our own visualization with similar colors but more relaxing patterns if we choose concept 2 as our final concept). Users were encouraged to think aloud during the process.

After presenting each idea, we asked users to rate how frequently they'd use the solution, how effective they think it would be, and how likely they would recommend the solution to a friend. We also asked their favorite/least favorite part of each solution, and let them compare the three solutions. We created an affinity diagram based on the qualitative results we got.

Users unanimously preferred Concept 2 and 3 over Concept 1. Some mentioned that Concept 1 is similar to Concept 3, but the latter is more engaging because of the gamification factor. Therefore, we focused our analysis on comparing Concept 2 and Concept 3. The user feedback is summarized below. 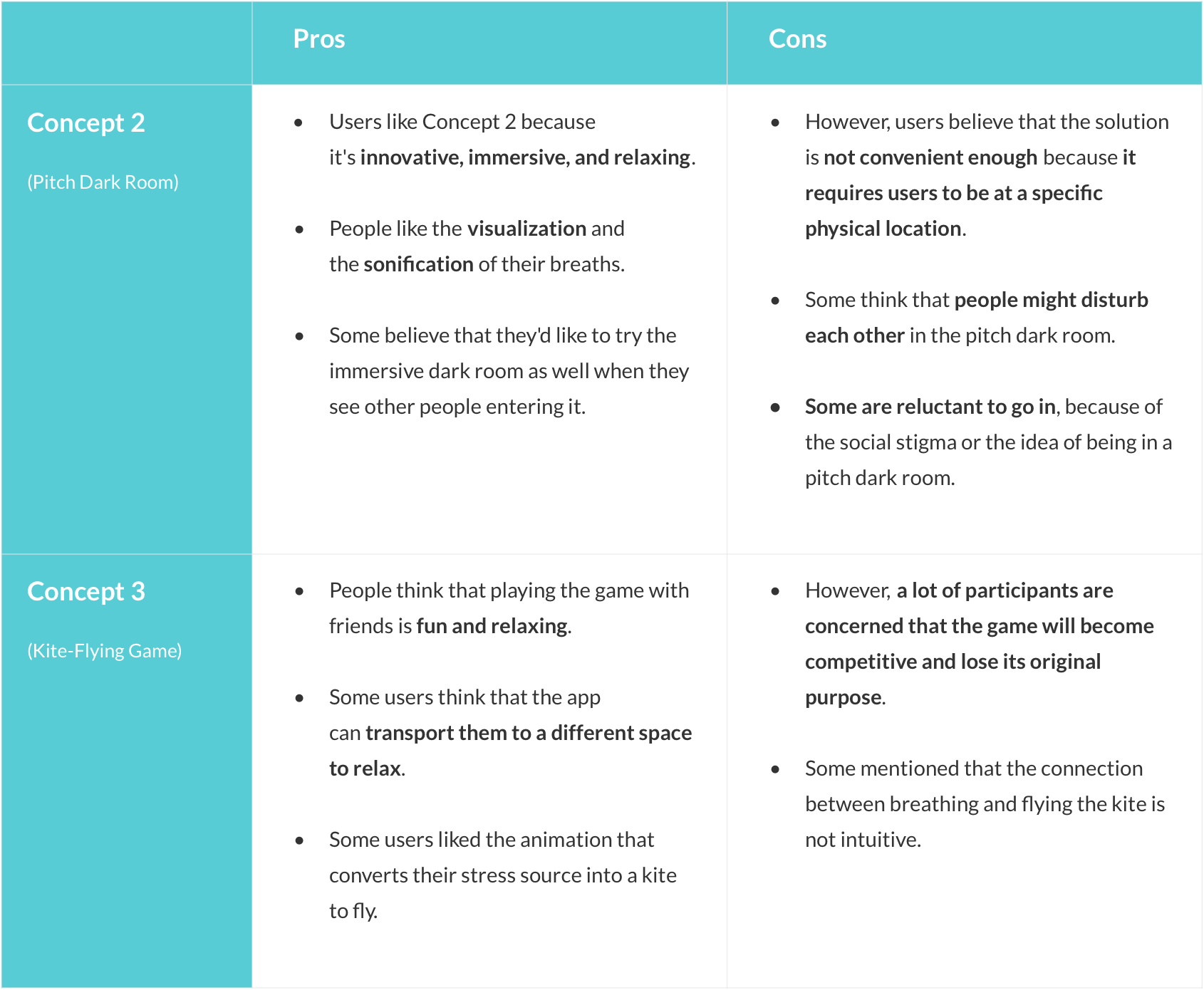 Based on user feedback, we decided to modify and go ahead with Concept 3 (Collective Breathing Game App) because:

We also decided to make the following changes to Concept 3 to address some of its drawbacks identified through user feedback: 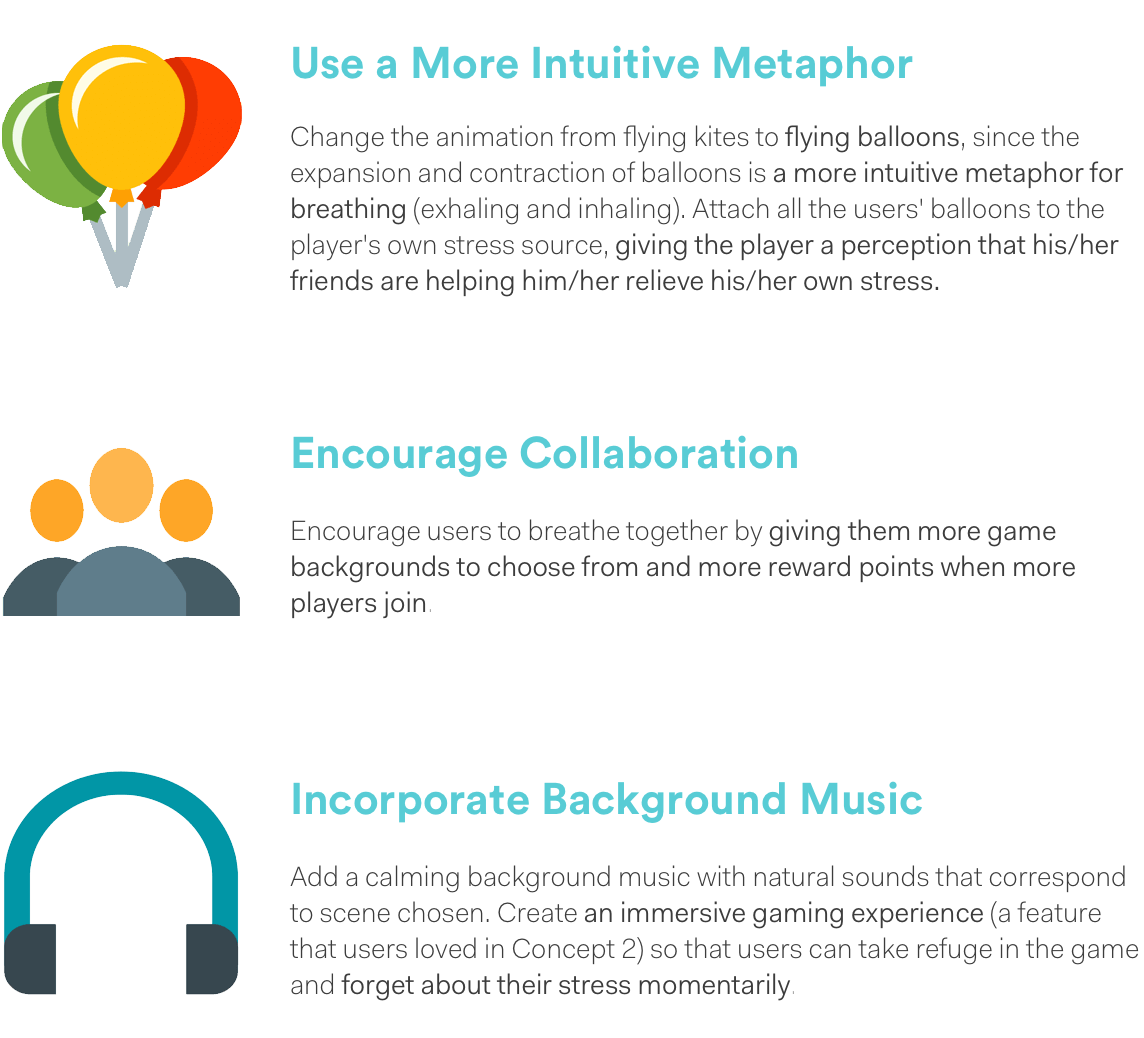 We then created our final information architecture: 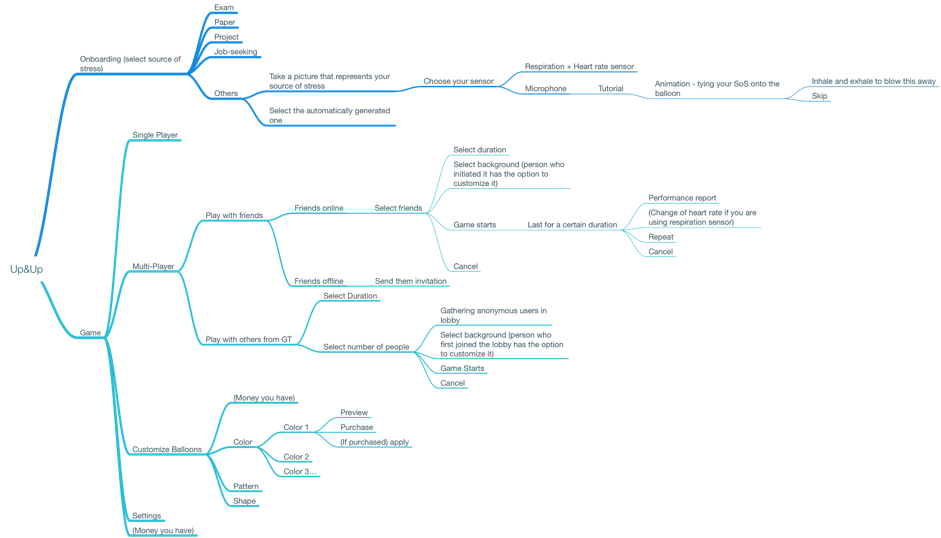 The game involves an initial setup process, which creates a personalized experience for users to select a specific source of stress and a sensor to measure the input. After going through a simple tutorial, users will be able to select the gameplay mode to play with either peer support or just by themselves.

We then provide options for users to play with either friends they are familiar with or others from the same school. In order to encourage users to use the multiplayer mode and gain peer support, we provide more customization options for the background of the breathing scene when more players are involved in the game. Then, users can immerse themselves in the game, with a nice nature background illustration and relaxing nature sound in the background. At the end of the game, the users will be rewarded based on how well the group did together. Finally, they can use the reward to customize their own balloons, an incentive designed to promote a prolonged engagement.

To evaluate our design, we conducted several usability testing sessions with our target users, Georgia Tech students. After explaining the purpose of the project and asking them some demographic questions (student status, perceived stress level, etc.), we gave them the following tasks to complete in sequence: 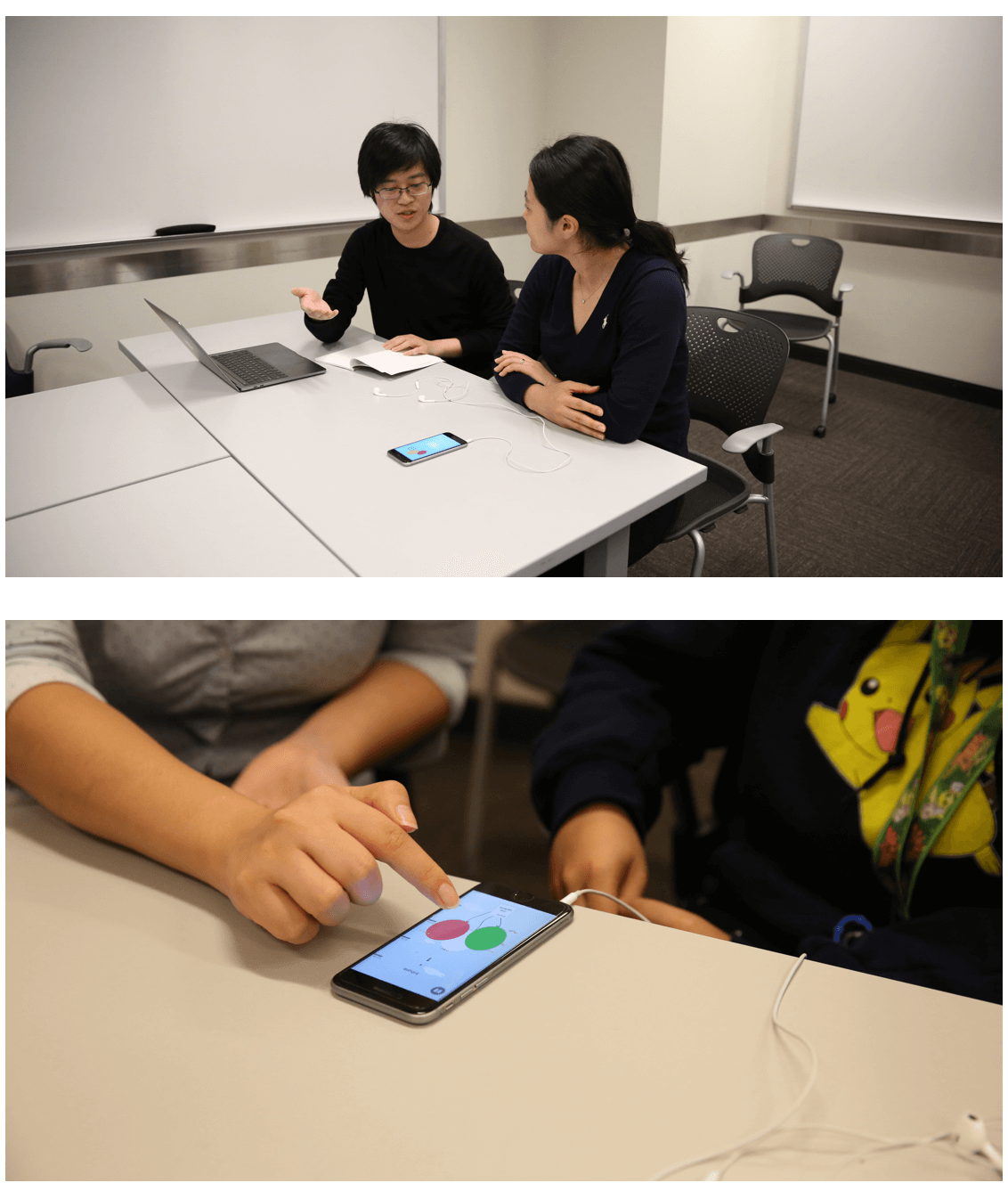 We then asked them about their experiences playing the game, how frequently they would use the solution once it's refined, how effective they think the solution is, and whether they'd like to recommend the app to their friends. We also let them comment on their favorite/least favorite parts of the design, and complete the System Usability Scale (SUS).

Based on users' feedback, we decide to make the following changes to our app in the future: 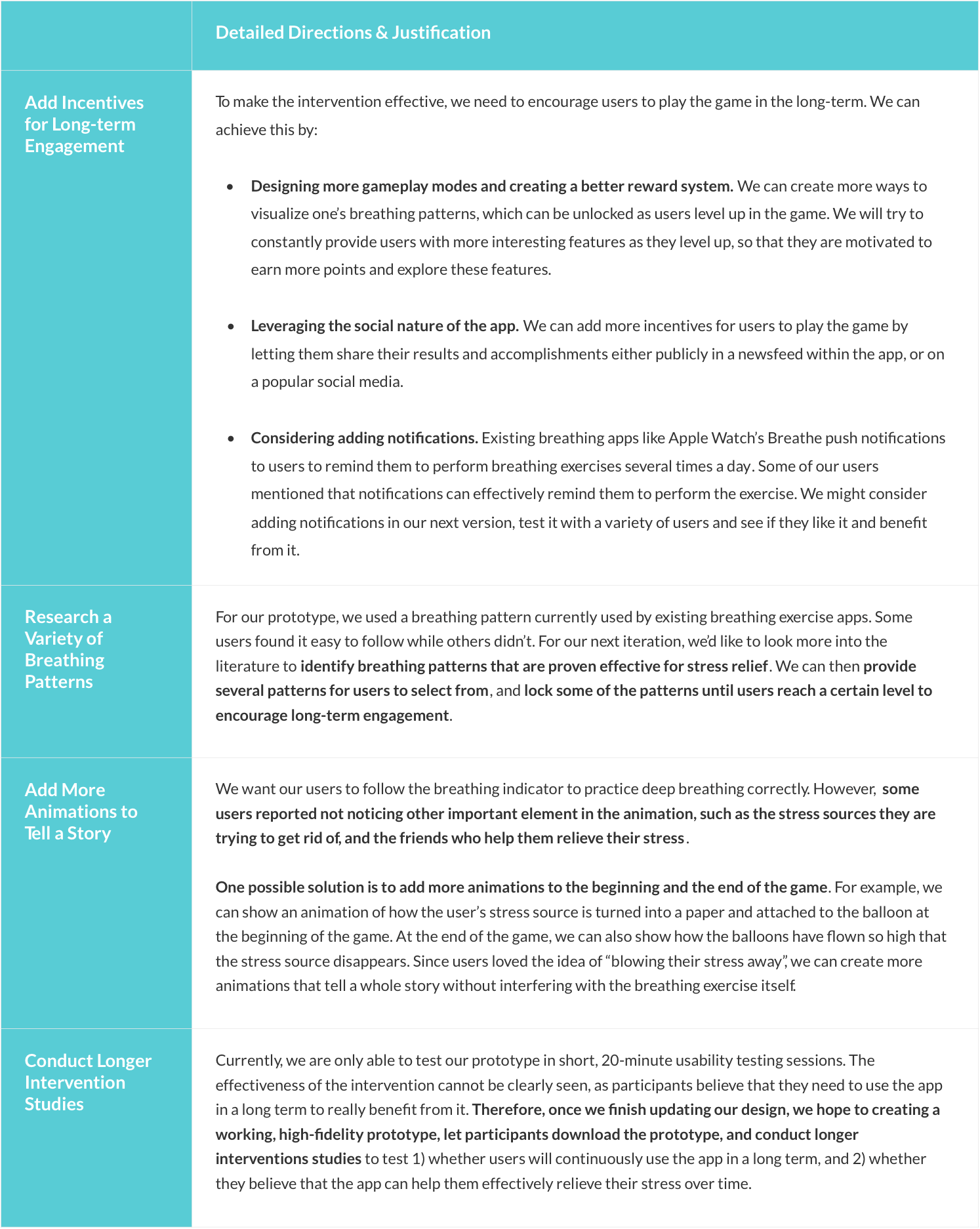